Selwyn Rouse is a seasoned, award-winning and well-respected tutor in Ontario who has dedicated the last 24 years of his life to bettering the lives of children in his community.

Selwyn came to Canada in 1967 at the age of 23 to attend university and graduated from the University of Toronto. After enjoying a rewarding career as a pharmaceutical development technician, which included improving the taste of a well-known cough syrup, Selwyn found his passion in tutoring.

For Selwyn, teaching is something that has to go above and beyond a teacher’s normal hours of 9-3 in order to help the child grow as a person. Selwyn believes that in addition to helping children succeed academically it is important to understand them on a personal level in order to motivate them and nurture their self-esteem.

Selwyn is the second of eight children; he grew up in a poor and devoutly religious family in Belmont, Trinidad. When Selwyn received Tropicana’s community builder award in June 2014, he thanked his parents posthumously for teaching him and his siblings that “what is important in this life is helping out our fellow human beings” and that if they managed to do that then “everything will be fine.”

After you finished your career as a pharmaceutical development scientist, what made you decide to go into tutoring?
Actually, I started tutoring long before I became a pharmaceutical scientist. When I was in high school, I was approached by a relative who asked me to tutor their three kids. So back then the seeds were sewn when I was 17. How I got into tutoring was back in 1990, through my brother and some other teachers. They had observed that black students weren’t doing well in school and they decided they were going to start a program on Saturday mornings so students could come get help.

It was September in 1990 when my brother approached me: I said to him “Joseph, I am no teacher” and he said “No. But you’re a father, with three successful children, therefore you are an educator”. So I went out in October of 1990 and I haven’t stopped tutoring since. And I said to myself “why not”. Well I have three kids, and the same way my parents pushed their eight children, telling us that education was going to be the vehicle by which we were going to move from socio-economic poverty to a standard of living that would allow us to live “the good life”. That was the driving force that told me “no Selwyn, you can’t walk away from these kids.” Now it has become a part of me. Because of what I’ve seen, in the context of meeting young people and tutoring I have decided to dedicate the rest of my life to helping kids.

In addition to the subjects you tutor your students in what else do you think is important for them to learn?
I have a term I call mentoring; It’s something quite apart from tutoring. Tutoring is more academic whereas mentoring has to do with your overall development as a human being. One of the things I think is happening in certain areas in the black community is that young black males are not necessarily getting the kind of direction that they need. I think that every black male should have a black father figure to look up to because every adolescent male needs to hear the growl of testosterone. So mentoring is a very important part of my tutoring of young males. I want to use my experience to point out to them that yes your academics are good but how you treat other people is important as well. This is something I work feverishly on in addition to tutoring.

24 years after Selwyn began tutoring, he is still at it today. Selwyn currently lives in Ajax with his wife and has been tutoring children in his community through his private tutoring business for the last seven years. 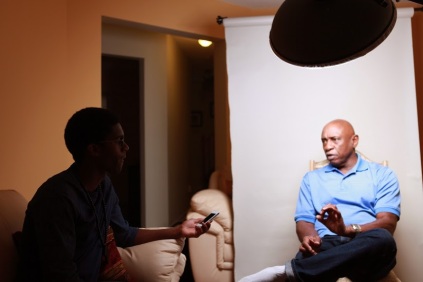